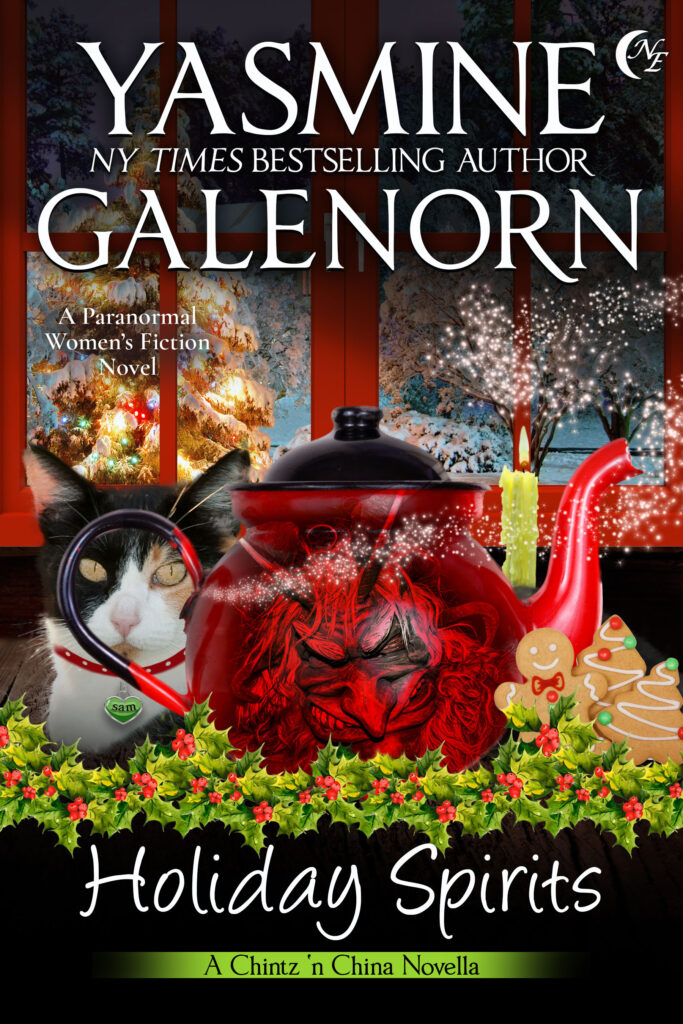 When Kip gets himself in serious trouble, a strange spirit enters the house—one that at first poses as Santa Claus. But beneath that jolly exterior, lies a dark creature from legend and lore. Join Emerald O’Brien for the holidays, as she battles both psychic turbulence as well as the demons every mother faces when her child lands in trouble with the law.

IT WAS THREE weeks till Christmas and the first snowfall of the season was hitting hard. We usually got a dusting of snow, or a few inches, but this year it was particularly chilly and the meteorologists were talking about something going on with the jet stream and La Niña and how we'd better brace for a whopper of a storm. So Joe made sure that we were well stocked with wood for the fireplace, and we had changed out all of the windows for double-paned ones, and made certain the furnace was cleaned and working well.

It still boggled my mind how willing Joe was to tackle the chores. Being married to someone who was interested in what was going on at home-someone who wanted to be in a partnership as opposed to a dictatorship-was proving to be a new experience for me. I was still getting used to the changes that had taken place over the past year or so.

On late Friday afternoon, I was almost finished with the last of the tree ornaments. Well, trees. We had two of them, an artificial one in the living room, which was eight feet tall, and then a large spruce in the front yard that we had to use a huge ladder to reach the top of. That one, Joe and the kids took care of. I wasn't all that comfortable creeping fifteen feet up a ladder.

As I hung two perfect satin owls on the tree, Kip came racing in.

"Mom? Mom!" He skidded to a halt as I gave him the no-running-in-the-house look.

I stared at my son, catching my breath as I realized how fast he was growing up. He was only eleven, but he had undergone a growth spurt and shot up three inches over the past few months. He was almost normal height now. He'd never been tall and I doubted he ever would be, but he was lanky and lean and looking like a gangly preteen now.

"What's shaking, kiddo?" I smiled. Kip had really blossomed since Joe and I had walked down the aisle. I hadn't seen my son this happy in a long time. Miranda-my fifteen-year-old daughter-barely batted an eyelash as Joe had moved in. But Joe meant the world to Kip, providing the father figure he had wanted for so long. Roy, his birth father, was doing better but he would never be the father who would teach Kip to be a good man. He just didn't have the dad gene. But I had to hand it to Roy. He had managed to stay in rehab for six months and though he was still battling with his alcoholism, he was trying.

"Mom, I heard something in the basement." Kip cocked his head, watching as I tried to squeeze another dozen ornaments onto the tree. I decorated like a fiend and woe be anybody who got between me and my ornament obsession.

I paused, the glittering orb suddenly heavy in my hand. "Something...or some...thing?" Life had quieted down for some time on the astral level. Either that or I had just been so busy I hadn't noticed anything going on. But neither spook nor spirit had raised its ugly head during the past six months. Even down at my tea shop-the Chintz ‘n China-the tarot readings had been easy, and life blessedly uneventful.

Slowly, I set the orb back on the coffee table, making sure it didn't roll off onto the floor. I draped my arm around Kip's shoulders and led him over to the sofa. He squirmed a little but let me sit next to him. Yeah, he was growing up, all right.

"I think...thing, Mom. There's something down there."

Damn it! I tried so hard to ward the house and keep the nasties at bay. "When did you first feel it? And is it...are you afraid?"

My son was as psychic as I was. I had taken him in hand a few years back after an astral entity had briefly possessed him and started teaching him how to ward and shield himself. It had proven to be an easy task, given that Kip took to magic readily. Miranda, on the other hand, wanted very little to do with that side of my life. Her focus was up among the stars. She wanted to be an astronomer. Or maybe an astronaut. She hadn't fully decided yet.

Kip tipped his head to the side. After a moment, he shrugged. "Kind of. It doesn't feel all that friendly and I know that whatever it is, it doesn't belong in the basement. I think there might be more than one, though. The second one feels darker. Denser?" He frowned. "Like gravy that's too thick."

Dense energy usually meant "low" energy, which meant energy vibrating at a level that could be dangerous. And that meant I'd have to go investigate and, quite possibly, kick some ghostly ass. But the ghost busting would have to wait because we were ready for dinner, and I wanted to finish the tree. As long as nobody was actively trying to scare us out of house and home, I wasn't about to let them interfere with our routine.

"Dinner!" Joe's voice rang out from the kitchen. He was a better cook than I was, though I could manage enough to fill my family's stomachs without too much complaint.

I stood and held out my hand, pulling him to his feet. "Oof, you're getting big, kiddo. How dare you grow up on me!"

"I can't wait till the other guys stop picking on me because I'm short."

"Yeah, I understand. Well, just don't get too big for your mother, okay?" I nodded toward the kitchen. "Come on. Let's go eat."

He gave me a quick hug. He'd always been short and thin, but now he was four-foot-five. I still had a few inches on him but give him another year and he'd be as tall as I was. Yes, my Kipling was growing up.

"What are your plans for the evening? You want to help me put up garland?"

He flushed. "Can we do that tomorrow? I'd like to help, but I want to go over to Sly's after dinner."

"Kip, you know how I feel about that. You were over there last night."

The flush turned into a frown. "But Mom, we're working on a project together."

I let out a long sigh. Sly, his best friend, was also a juvenile delinquent in the making. The pair had gotten in a lot of trouble through the years, bouncing off one another in ever-escalating fiascos. So far, the worst had been breaking windows in an abandoned house, and trying to be junior-size con men by shaving the fur off Sly's dog and selling it as monster fur. But I was worried that one of these days their exploits would overstep the boundaries of high jinks. Kip promised that he'd be on his best behavior, but I knew how easily my son was swayed into stupid stunts.

"Okay, but be home by eight-thirty. Not a minute later than that, you understand? And if he's alone, I want you to call me and tell me so that I know." Sly's mother didn't keep track of her kid, and I worried about the boy, but there wasn't much I could do. The one time I tried to talk to Katherine she had blown me off like a bothersome mosquito.

We entered the kitchen, where Joe was setting a roast and mashed potatoes and salad on the table. A fireman, he worked four days on, three days off at the firehouse. Tomorrow, he'd be heading back to work, but when he was home, he enjoyed taking over the cooking.

As we gathered around the table, Miranda came bouncing in.

"Hey, I can't believe I made thirty bucks today tutoring the Jameson kid in math. He's not dumb, but he hates to study." She slid into a chair.

"Got plans for your windfall?" I asked.

She laughed as Joe handed her the juice. "College fund. Scholarships are nice and I know I'll get one, but I'm not about to let anything go to chance."

With that, we began to pass around the dishes, discussing our days over the clink of forks on china. After dinner, Kip took off for Sly's house, and Miranda headed out for the library to meet with her study group.

Joe turned to me. "We have the evening free." He rolled his eyes toward the ceiling.

I grinned. "I'd love to hop into bed with you, but first, I have to look into a potential problem." I told him what Kip had said.

"Are you sure?" He wrapped his arms around me and pressed his lips to mine in a slow, fiery kiss. I was thirty-eight, Joe was twenty-eight, and we hadn't moved out of the hot-for-each-other stage, even after a couple of years. Deciding the ghosts could wait, I took his hand and led him upstairs.