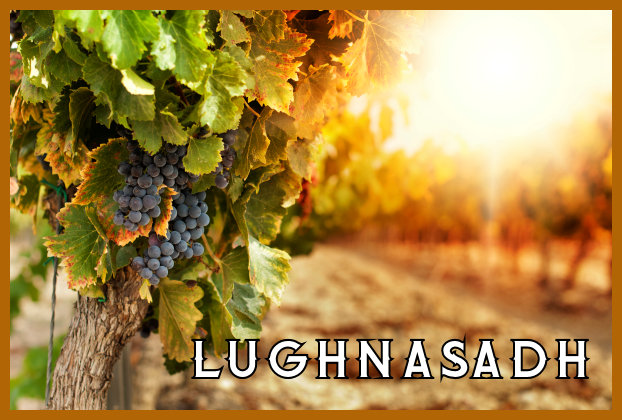 LUGHNASADH:
THE FESTIVAL OF SACRIFICE
THE FIRST HARVEST
By Yasmine Galenorn
(from Dancing With the Sun*)

The golden glow of late summer sun, the tang of early morning that tells you autumn will soon be here, the scent of dill and mustard seed and pickle brine, the first ears from the corn patch, tomatoes so ripe they burst when you touch them…it is August 1st, the Festival of Lughnasadh (pronounced Loo’-na-sah).

Lughnasadh is the Celtic festival dedicated to the God Lugh, the Long Handed, who is associated with light and fire.  The festival is also considered to be the first harvest, the harvest of the grain, and is linked to the God/Spirit of the Corn, personified by the name John Barleycorn.  In Lammas, the Christianized version of Lughnasadh, we see a strong connection to the sacrifice of the corn god, for Lammas means loaf mass, what one might consider a requiem for the grain.

Lughnasadh, celebrated on August 1st, is the season during which the God of Grain is sacrificed that the harvest might take place and thus the people can live through the coming seasons of autumn and winter.  Once again it is a time of cleansing, it is time to clear your house for the approaching Autumn, for the waning of the year.

In magickal terms, the Oak King journeys deep into the underworld where He will rest until Yule.  The Holly King increases His grasp over the season as the days grow shorter.  As the fruits of the Lady ripen, She becomes the Dark Goddess, the Crone, who sacrifices the God of Corn that the people might live.

The Colors of Lughnasadh

Colors associated with Lughnasadh range from golds and yellows to black.  Although we still see green, for the fields and trees have reached their full gamut of foliage, the focus is on the yellows and golds of the corn, and the black of the Dark Mother.

Bone and tan (as in antler and bone ritual objects) accent this holiday nicely.

Incenses for Lughnasadh include frankincense, heather, sandalwood and copal.

A wide variety of herbs are associated with this time of year including sunflowers, rye, oats, corn, yarrow, dill, wheat, acorns (these are poisonous unless properly leached of their toxins) and hazelnuts.

Woods connected with the Sabbat include grape vine, hazel and oak.

Blackberries are intricately linked with Lughnasadh, as is the berry known as bilberry (a dwarf blueberry).  Both ripen at this time of year and both have been important food staples in history.  With berries, one could make jam which would keep for long periods, or ferment them into wines.

I have long had a love affair with blackberries.  Although I know they can quickly take over a plot of land and have to be pruned, I adore the huge bramble patches.  The blackberry is a survivor, the spirit of this plant so hardy that almost nothing can destroy it.  In return for the land it claims, the brambles return fruits sweeter than the most tempting chocolates.

One summer, some fourteen years ago, my then-partner and I were extremely poor.  We had little to eat, we couldn’t find work and every day was filled with worry and hunger.  Then the blackberries began to ripen.

Every day we would go out and pick blackberries.

I would stand in silence in the bramble patch, methodically picking berry after berry under the golden sun. After a few days of this I began to notice a feeling of welcome from the brambles.  I would enter the patch and immediately feel safe and protected, a feeling I didn’t experience much in those days.

The droning of bees, the warmth of the sun, the smell of the berries all converged, creating a drowsy, trance-like state to which I willingly submitted.  I listened to the whisperings of the plants, I felt the energy of the Bramble Lord, as I began to call him (it was definitely masculine), and I fell in love with the gentle, unshakable strength the blackberry possesses.

The berries kept us eating all summer.  We didn’t have much else, and we were still hungry, but somehow those buckets of berries sustained us through that rough patch and I have never forgotten the generosity of the plant–I don’t know how many times I went out there to strip the vines, but there were always more the next time.

The corn dolly made at Imbolc represents Brighid.  At Lughnasadh you might choose to make another.  She will represent the Corn Mother, the personification of the Goddess who watches over the harvest to see that it ripens.

If you grow your own corn, it is traditional that the Corn Mother be made from the last stalks to fall.

The Corn Mother should be placed in your barn or your pantry to ensure that your family doesn’t go hungry during the coming autumn and winter.

The season of colds and sniffles is a month or two away, but now is the time to hang up charms to ward off their influences (and to eat a healthy diet of fresh foods to ensure you are doing all you can for your health care).

A garlic braid in the kitchen will ward off disease.

An onion placed on the kitchen windowsill attracts illness and disease–don’t eat the onion, but replace it with a new one when it starts withering away.

Don’t put the onion in your compost pile, though.  Toss it out in the woods away from your home or in a body of running water.

This is also the time to gather and dry herbs for winter.  Tie in bundles and hang in a warm, dark place.  When dry, strip and store in dark glass jars.  Be sure to label your herbs–when they are dried, it’s hard to tell the difference between some of the plants.

During the second week of August each year we witness a beautiful, breath-taking display that embodies the wonder of the universe.

Each year, starting about August 8th and lasting for a week or so (check your almanac each year for exact dates), the Earth passes through the Perseids meteor showers.  Every night, from dark until early dawn, meteors race through the sky, dazzling us with the most incredible fireworks display we could hope for.

The number of meteors racing through our atmosphere grows each night as the shower peaks, until they reach a rate of one or two a minute–or more!

Take a blanket and a friend or two outside on one of the peak nights and spend the evening watching the cosmic rain as it showers down its power and strength.

You’ll soon find yourself shouting, “There’s one!” “Look at that one!”

My husband and I have fun competing for who can spot the most meteors–he accuses me of using my magick to entice them into the corner of the sky that I’m watching.  I laugh and thank him for having so much trust in the power of my Witchcraft!

While it’s traditional to make a wish on every shooting star you see, I think that we have to be careful and not get too greedy during this time–make one or two charms and then when you see a meteor, focus the energy into the charm.  That way you can capture the energy of the display without spreading your intent too thin.

Or just enjoy the show.  You don’t have to cast spells to actively experience magic–the sheer brilliance of the display is enough to set our hearts to fluttering.  Anything more is just icing on the cake.

*Copyright Yasmine Galenorn 1999, and 2020
You may print this out but you do NOT have permission to post it on other websites, etc. Or to use it in your own writing.