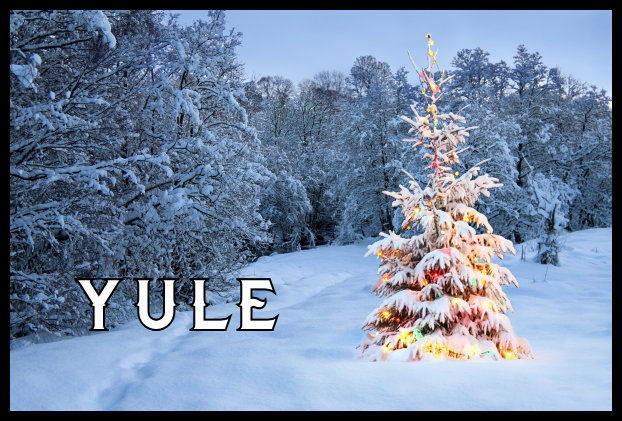 YULE:
THE FESTIVAL OF REBIRTH
By Yasmine Galenorn
(From Dancing With the Sun)

Fresh snow kissing the ground, the smell of bayberry and cinnamon drifting through the kitchen, mistletoe peeking over your shoulder, gold and silver ornaments nestle in their boxes ready to bedeck the Yule tree, holly berries cluster amongst dark glossy leaves…it is December, Yule Eve, and we gather to rejoice as the Sun King is born again.

Yule is the celebration of Midwinter.  The Winter Solstice is the longest night of the year when the Sun King is reborn to light the world and free it from the chilling grip of winter.  Held in late December, it is an astronomical event so the actual date can vary from year-to-year, but the holiday usually falls on December 21st or 22nd.  Check your almanac and account for differences in time zones.  It may fall on December 21st on the west coast, but December 22nd on the east coast.

Yule is traditionally a time of togetherness, of parties and festivities.  In our not-so-distant past before supermarkets and snowplows existed, villages and towns were often cut off from one another by snow and ice.  Entire families might go through the harshest part of winter without seeing another soul.  If the harvest wasn’t managed properly or if the crops had been scarce that year, people died from starvation.

Yule became the hope to which people clung, hope for  the return of warm weather and planting seasons.  In the far north, the sun actually disappeared–the longest night was truly the longest night with the sun barely peeking above the horizon.  It is no wonder that in agrarian societies where everything depended on the success of the crops that the return of the sun each year was cause for celebration.  The Gods had been kind–the source of life was re-emerging from darkness.

With the Sun King reborn, the days lengthened and the season of growth once more overtook the land.

The Sun (or Oak) King reclaimed His place as ruler over the Waxing part of the year, while the Holly King gave way, retreating until Midsummer.

Preparing For The Yule Season

There are many traditions and rituals for Yule but the one we prefer incorporates both the rebirth of the Sun and the Holly King/Oak King mythos.

The Yule altar cloth is seasonal, and altar dressings include a Holly King, reindeer, winter faeries, silver and gold candles, a decanter of cordial and gold garland.  Seasonal additions include a pretty jar of candy canes, bowls of nuts, candy, apples and pears.

We decorate for the holidays the weekend directly after Thanksgiving.  We hang lights, garlands, put up the tree, make the house sparkle!

During the season, we watch seasonal movies and hold our annual Yule open house. We love to celebrate with friends, and on Yule Eve, we hold our ritual.

Yule gifts probably originated as gifts of food, a welcome treat during the cold months of potential starvation.  In a world where the supermarket and the mall are a five-minute drive away from most Americans’ reach, we have become a nation of consumers.  Most of the average store’s profits are made during the month of December.

I admit that I love the presents and packages and brightly colored paper and all…and so I do my best to find the line between overspending and penny-pinching.

We have so many friends and I wish I could fulfill all of their dreams but sometimes we’re lucky to even buy gifts for one another.  So I’ve started buying gifts throughout the year, which helps ease the strain on December’s budget.

I’ve also discovered several beautiful and magickal gifts to make at home.  If you’re artistic find smooth river rocks and paint them with runes for good fortune; charge them in circle and give them as charms to your friends.

Or you can buy 6″ disks of wood from the craft shop and use a wood-burner to create Pennsylvania Dutch hex symbols.  There are several books with information about the hex symbols and what they represent and how they’re made.

You can give gifts of baby-sitting and house-sitting, or back rubs and scalp massages.

One year, when we were very poor, I made up 20 dozen gingersnaps and 10 dozen chocolate-peanut butter chip cookies and wrapped them in foil with ribbon.  Then my husband and I made gallons of candied corn (using pink and green colorings in the syrups) and our friends got sweet treats that year.

Do not be embarrassed if your gifts come from your heart and hands rather than the store.  With the insistence on buy! buy! buy! that our media pounds into us each December season, it’s hard to feel okay about home-crafted gifts, but if your friends love you, they will love what you make for them.

One note: I buy gifts for Yule throughout the year, but I won’t allow myself to wrap them until the weekend after Thanksgiving.  This way I still have the excitement of wrapping gifts without the headache of holiday shopping.

I have always loved tinsel, but it’s dangerous to have around cats so I’ve developed a way to get a similar look.  Buy strings of plastic beads in metallic gold, silver or iridescent colors (each bead should be about ¼” diameter).  Cut the long strands into 18″ lengths.  You can drape these over the tree limbs and if a cat pulls one off, it’s less likely to swallow the beads than it would tinsel.  I was surprised by how pretty they look.

We’ve found that having an artificial tree discourages our cats from trying to climb it–no small feat with four felines who think the top of the refrigerator is their home.  I suppose that it hasn’t got the smell of a tree and so they just sit underneath it, on the presents, and occasionally steal one of the satin balls and bat it into a corner.

The Colors of Yule

Of course red and green are traditional colors this time of year, but think about gold (for the Sun King) and silver (for the Holly King).  White is always appropriate (for snow) and I like to tuck blue into my color scheme.  Not only is it a traditional Finnish color, but it reminds me of ice.

Bayberry, cinnamon, frankincense–what Yule ritual would be complete without at least one of these scents?  Also consider spruce and pine–although many people are allergic to pine, so be cautious if you’re using it in group ritual–ask first.

Use bay leaves to write wishes on, then throw them in the Yule fire.  Make cinnamon buns and the aroma of fresh baked sweets will not only satisfy the heart but invoke the powers of protection and success into your home.

Of course holly is associated with Yule (protection and good fortune), and birch (the Yule log is traditionally made from birch wood).  Burn ash at Yule and you’ll be invoking prosperity for the coming year.

It is best to make this out of birch if at all possible.  Procure a length of birch log about 18″ long.  Cut the log in half length-ways so the bottom is flat.  Sand it down.  Measure the top and drill three equally-spaced holes to hold taper candles (about 3/4″–1″ each).  Sand these as well.  You can stain the bottom to protect the Yule log, and I recommend fitting the holes with metal so that the candle flames don’t burn into the wood.

Decorate with runes, gold paint, holly leaves, ribbons, etc. as you like.

*Copyright Yasmine Galenorn 1999, and 2020
You may print this out but you do NOT have permission to post it on other websites, etc. Or to use it in your own writing.