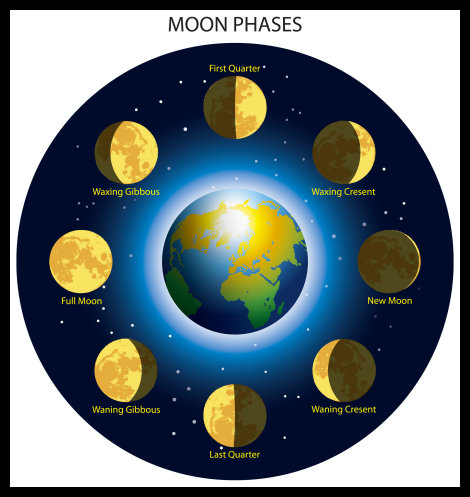 Waxing Moon:  Waxing to Full is the time in which to cast invoking spells, in which to draw situations to you.

Full Moon:  The Full Moon is the time in which to focus on the culmination of spells cast during the Waxing phase; it provides the strongest power for invocations.

Blue Moon:  Anytime a single month has two full moons in it, the second full moon is referred to as a Blue Moon and is considered to be stronger than a regular full moon.

Waning Moon:  Waning to New is the time during which to banish and release things from your life; in which to devoke (to take apart or let go of).

New Moon:  The New Moon is the time in which to examine hidden issues; to plan for new beginnings and ferret out secrets.

Black Moon:  Any time a single month has two new moons in it the second new moon is referred to as a Black Moon and is considered to be stronger than the regular new moon.

A note about work done during the New Moon:  there are some Witches who will tell you not to do any magic during the New Moon.  I understand this may be their belief but I have had excellent success working on the New Moon, especially with Dark Mother Rituals and spells to discover new information about certain situations.  It is also an excellent time to scry.